Note: The forum uses a separate login system to the galleries.

I was researching traditional Japanese dolls the other day and came across a papier mache variation that I'd never heard of before.  They're called Okiagari-koboshi ("Getting Up Little Priest Doll").  Essentially, they're weighted egg-shaped PM figures that always right themselves when toppled over, much like the popular plastic Weebles toys of my youth (not sure if those were named something else in other countries, but that's what the toy line was called here in the U.S.)

An example of an Okiagari-koboshi: 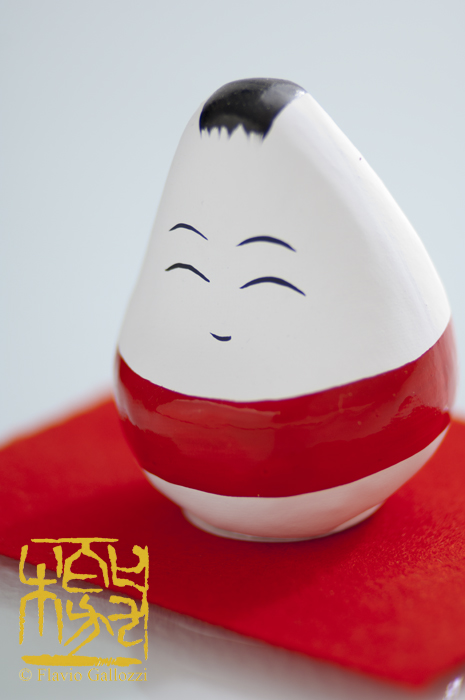 I haven't seen any instructions, but, if I had to guess, I'd imagine you could make one pretty easily by using a real, or plastic egg as a form for the PM, and then glueing a rock or something in the bottom to weight it.

How tall are these in particular?  Or do they vary?

We just called them roly-polys.

I've made a number of self righting figures based on eggs.  I make two small holes in the egg, enough to empty the contents.  Then rinse and fill to a third with flowing plaster of paris.   Rotate the egg with fingers covering the holes, to coat the inside, then allow to settle in the upright position.  This lets the residue form in the base, weighting it nicely.  Too much plaster of paris and you get a thermal reaction that cracks the shell.

@CatPerson:  The size of Okiagari-koboshi vary, although they tend to be small in the general sense.  I looked at numerous examples on Google images and there was noticeable variety in height, particularly in group photos.  Most of them looked to be 1-3" tall, although I imagine there might be giant varieties as well (perhaps blow-up ones like the toy punching bags that always right themselves?)

@dopapier:  Your technique of pouring some plaster of paris inside the egg is a much better, and less invasive, idea than my suggestion of putting a rock inside the egg's base (unless, of course, one were to use one of those plastic eggs that easily snap into two halves for the form--adding an internal weight to one of those would be easy).

I'm rather fond of Matchbox's recent "Big Boots" toys, which are essentially more detailed Weebles/Roly-polys with two weighted feet, rather than a simple ovoid body.

It'd probably be pretty easy to make one of these out of papier mache too, all you'd have to do is make the figure's feet rounded and weight them (ideally equally) during the construction process.

Start with a rounded rock (or two), apply PM over the surface and start building from there.  There should be many ideas that would apply.

Some people weight their designs with fishing weights or shotgun pellets.  Animals tend to be the usual from what I've seen.  PM is so light that the items tend to fall over (or blow over), and the weights lend more substance.

My figures are usually solid constructs these days, but I can recall weighting the feet of some of my hollow PM figures in years past, but just to make them stand unassisted, not to create the Weeble/Roly-poly self-righting effect.  I can recall using small rocks, nuts & bolts, etc.  These days, if a figure can't, or won't, stand on its own I usually just super glue it to a transparent plastic disc base.

The plaster of Paris I mentioned - I  said it was a 'flowing' mix.  This is because the two holes are really too small to be able to pour it in.  You have to insert one hole in the mix and put your lips around the other, sucking to pull in enough to fill about one third of the egg (too much and you'll get a mouthful!), then rotate as I described in my February post.